The star that falls from Heaven is Apollyon, who governs the bottomless pit.  He opens the gates to warfare, but the war is a restricted one, "And in those days shall men seek death, and shall not find it; and shall desire to die, and death shall flee from them" (Revelation 9:6)  This restricted war occurs for two reasons.  First, a select number of individuals finally understand and believe what they were told repeatedly about prayer, and so they pray the Prayer for God's Justice as well as others which enable them to perform miracles "And I will give power unto my two witnesses, and they shall prophesy a thousand two hundred and threescore days, clothed in sackcloth. These are the two olive trees, and the two candlesticks standing before the God of the earth. And if any man will hurt them, fire proceedeth out of their mouth, and devoureth their enemies: and if any man will hurt them, he must in this manner be killed. These have power to shut heaven, that it rain not in the days of their prophecy: and have power over waters to turn them to blood, and to smite the earth with all plagues, as often as they will" (Revelation 11:3-6). Secondly, those with military power seize upon the realization that they may attack with impunity, if their cause is just "And it was commanded them (the 'locusts') that they should not hurt the grass of the earth, neither any green thing, neither any tree; but only those men which have not the seal of God in their foreheads" (Revelation 9:4). They boldly attack, and a number of them meet with success, but only for a limited time "And to them (the 'locusts') it was given that they should not kill them (those without God's seal), but that they should be tormented five months" (Revelation 9:5).

The locusts, as is clear from their description, are no ordinary locusts.  They are war machines as is made clear by "The shapes of the locusts were like unto horses prepared unto battle" (Revelations 9:7) and "They had breastplates, as it were breastplates of iron; and the sound of their wings was as the sound of chariots of many horses running to battle" (Revelations 9:9). This combination of descriptive items suggests camouflaged military helicopters. We can not expect St. John to have understood what he was seeing (see my discussion on Prophecy), so his description must be interpreted:

A further indication that these are helicopters and not insects is that their mission is not to eat grass, as normal locusts do, but to harass the wicked, "And it was commanded them that they should not hurt the grass of the earth, neither any green thing, neither any tree; but only those men which have not the seal of God in their foreheads" (Revelation 9:4).  The harm that they do is restricted to causing pain that endures for a long time "and their power was to hurt men five months" (Revelation 9:10). But, as they say, a picture is worth a thousand words: 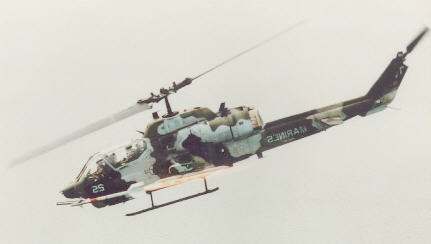 The number "five months" is not necessarily meant literally. Words like 'month' and 'day' are used in Revelation to refer to a cycle of time, an episode, not to a fixed unit of time. For example, a horse race is an episode, but not all races last for the same amount of time. In this case, it is likely that the period 'month' refers to about a decade, so a period of about 50 years is indicated.  Helicopters first began to be used in warfare in the Korean War, which started in June, 1950. The injunction that "And to them (the 'locusts') it was given that they should not kill them (those without God's seal)," refers to the fact that the helicopters were also used to save lives.  And the remark, "And in those days shall men seek death, and shall not find it; and shall desire to die, and death shall flee from them" points to the remarkable progress made by medicine which rendered many types of wounds, which in earlier times would have been deadly, non-fatal.